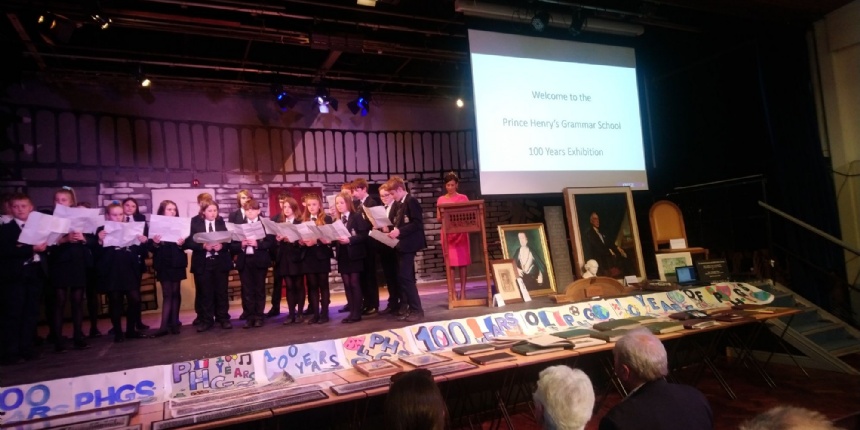 Over 350 people of all ages flocked to the 100 Year Exhibition at Prince Henry’s Grammar School. AS well as local dignitaries, who attended the launch, the public exhibition rang with cries of “I haven’t seen you since 1963!” as ex-students saw each for the first time in decades.

The Exhibition, included many items from the archives, as well as new work from current students. Other exhibits included several cine films, converted to digital thanks to a grant from Otley Town Council, a display showing the careers of the Kerr Scholars since they left Prince Henry’s (many of whom visited the Exhibition) and a specially produced video about Prince Henry’s, created by the current Year 7 media club.

Brian Agar was reunited with the swimming cup he was in the inaugural winner of in 1944 and 1945 and amused visitors and staff alike with his tale of the only time he was ever released from doing homework, when his Physics Teacher announced in 1945 that if peace was declared during the lesson they would be let off homework – it was and they were!

Another ex-student told the tale of meeting their first love (and marrying them 40 years later) and returning to take pictures together of where they first met. Others came to see the school where their parents had gone to school, for the first time. The cine film of the early 60s at Prince Henry’s, elicited much excitement as visitors recognised themselves, friends and teachers on the screen.

Visitors wrote “Fantastic exhibition – so much to see.” and “A wonderful exhibition and a delight to meet a few old compatriots.” And “Fabulous tours. You don’t know what you’ve got til it’s gone. Lucky to have attended this school.”

“The Exhibition has been lovely event – connecting the school old and new together again. We have been delighted to see so many of our ex-students and it has been fascinating to hear of their time at school and their lives since then. The atmosphere has been extraordinary.” said Stephen Clarkson, Assistant Headteacher, who organised the exhibition.