CELEBRATION EVENING WAS A GREAT SUCCESS 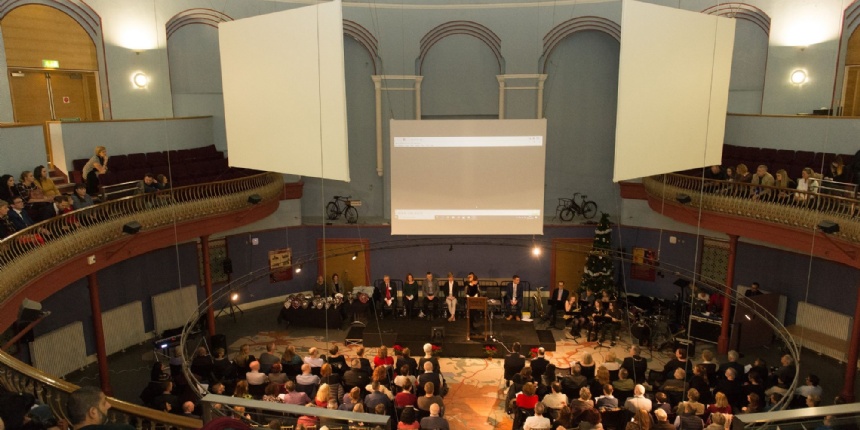 Students from across the years at Prince Henry’s were rewarded for their achievements in all areas at the annual Prince Henry's Celebration Evening at the Leeds City Museum Central Arena. Over 500 students, invited guests, proud parents and carers and staff enjoyed the experience, as sponsors and Guest Speaker and ex-student, Matthew Walker, Global Senior Brand Director of Arla Foods, handed out awards.

In his speech, Matthew Walker

In his speech Mr Walker talked about his career and highlighted the changing world in which businesses are operating. He also urged students not to underestimate the importance of their opinions to business. He said: “We will not find the solutions to our changing world, it will be you who do that.”

The prestigious Kerr Scholarship, awarded to the student with the best A Level results, was received by two students, Marc O’Halloran and Jack Auchterlounie, who both achieved 4 A*s in their subjects. Marc is currently studying Discrete Mathematics at Warwick University, while Jack has taken a gap year, while applying to study Mathematics at Cambridge University.

The Walter Robinson Award for Top Performance at GCSE was shared by Poppy Jopson, Jodie Richardson, Ellis Stanton, who earned 36 top grades between them, including 26 Grade 9s.

Awards are given to students for attainment and progress, but also for excelling in other areas which are also central to the ethos at the school, such as citizenship and caring for others. As well as last year’s GCSE and A Level students, students from all years are recognised for their efforts.

Excellence in Sport and Education programme student Sam Dickinson won the Hollings Crowe Storr & Co Sports Award for Outstanding Achievement in Sport (Boy) and the Chris Hatton Trophy for Academic and Sporting Achievement, not just for his outstanding result in A Level PE, but also for his county and national representation and commitment to the team ethos of teamwork, discipline, enjoyment, sportsmanship and respect.

The Prince Henry’s Association award for Service to Community and School was awarded to Jasmin Lennie for her netball coaching and the Alice MacGill Memorial Shield, awarded to a student displaying thoughtfulness, helpfulness and compassion, went to Erin Shaw.

The Jack Hurst Memorial Award for Support for Fellow Students, which was awarded for the first time in 2018, went to Georgia Jennings.

"The high level of success of Prince Henry’s makes it increasingly difficult for staff and governors to select from the wide range of high calibre students. In addition to awards for attainment, there are the equally important awards for excellent progress, outstanding attitudes to learning and service to the school community across every age group – areas highly valued in the inclusive school ethos. It was also lovely to have an ex-student, who has achieved so much in his chosen career, speaking at the event. We are always proud of our students’ accomplishments – both when they are with us and in their future lives.” said Janet Sheriff, Headteacher.